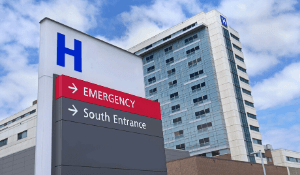 MetroWest Medical Center recently announced plans to shutter nearly all services at its Natick Campus, also known as Leonard Morse Hospital. Gone will be the medical/surgical unit, intensive care, operating rooms, the emergency department, and outpatient rehabilitation. Owned by Tenet Healthcare Corp. since 2013, an out-of-state for-profit healthcare company, Leonard Morse has been a community fixture since 1893. The closing should be complete in under four months.

So, what does this mean?

Leonard Morse is the only hospital located in Natick. The nearest hospital would be MetroWest Framingham, over five miles away (also owned by Tenet Healthcare). That may not sound like a great distance, but with the traffic congestion that plagues this area, travel could consume an extra 20 minutes at a minimum. That’s a long time when a life may be at stake.

Patients who had been treated at Leonard Morse will now crowd other area hospitals and emergency rooms that are already at or over capacity. According to the Massachusetts Nurses Association, the closing will “impact the safety” of residents and result in “added stress to an already overburdened health care system…”

Investor-owned, for-profit healthcare organizations are not new, but they are an increasing part of the healthcare landscape and a departure from traditional nonprofit community-based hospitals. Here are several key differences:

For-profit hospital ownership and oversight are also more vulnerable to change and potential management disruption. Take Leonard Morse. Initially acquired by Columbia/HCA in 1996, it was subsequently purchased by Tenet Health Systems, then Vanguard Health Systems, and came under Tenet again in 2013 when Tenet acquired Vanguard. Most recently, Leonard Morse received a patient safety grade of “C” based on publicly reported errors, accidents and injuries from Leapfrog, a nonprofit watchdog organization. To put that in perspective, of 60 Massachusetts hospitals rated, Leonard Morse was one of nine hospitals awarded a “C” for fall 2019, the lowest grade given in the state. The hospital had been recognized as one of the top 100 best hospitals in the country by Healthgrades, an internet healthcare referral and scheduling service.

It’s difficult to say why Tenet made the decision to close Leonard Morse. The two MetroWest hospitals did make a profit last year after a loss the year before, mirroring the financials of the parent company Tenet. Perhaps by consolidating key services at MetroWest in Framingham and reducing overhead, that profit picture may be even stronger for shareholders. What we do know is healthcare workers and patients will be scrambling to find homes elsewhere, and there will be an impact on both continuity and availability of care.  (Note: Tenet owns one other facility in the state, Saint Vincent Hospital in Worcester.)

The good news is that for-profit hospitals can and do provide quality care and their emphasis on efficiencies can keep costs down and be a good template for profits and nonprofits alike. However, for centrally managed for-profit hospitals, maintaining those strong community ties and focus is more problematic.

« The Hidden Risks of Mail Order Pharmacies
Is Your Loved One Safe in the Nursing Home? »